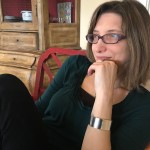 Her work has been published by many outlets, including The Atavist Magazine, BuzzFeed News, The Seattle Times, the Texas Observer, Pacific Standard, The Marshall Project, The Appeal, and The Walrus Magazine. It has also been featured on CBC Radio, This American Life, Weekend America, and the Tablet Magazine podcast Vox Tablet. In 2006, she received a fellowship from the Alicia Patterson Foundation to write about detained child immigrants.

Previously a staff writer for the Chicago Reader, specializing in immersion journalism, she now writes for Capital Daily in Victoria, BC.